In Case You Missed It: Mark Seeley Talks Strategy & Innovation on Business RadioX 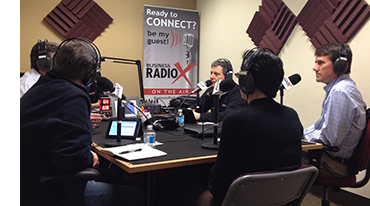 Earlier this year, Intellinet’s president and senior partner, Mark Seeley, was featured on BusinessRadioX’s Technology Leader program. Seeley joined guests Blake Patton of Tech Square Ventures and Nancy Treaster of Verint along with hosts Lee Kantor and Stone Payton to discuss trends, best practices, and new developments within the organization and on the technology scene.

In case you missed it, here is the first part of the interview.

BRX: So [Intellinet is] consulting.  Is it services that you primarily provide?

MS: Yep, Intellinet is geared around management consulting which is really around business consulting and Microsoft centric technology services. We started in the early days, 1993, about 20 years ago. In the early genesis of Microsoft back office, when email was the hot thing. Now, it’s obviously evolved much greater than that but really anything Microsoft in the back office - SQL to custom development to BI to Portals. All those things that corporations run their business on. We do it for large corporations, international corporations [we’ve served] about 1,000 customers here in the east coast.

BRX: Now are you the one that does most of the selling and marketing? Or do you have a team?

MS: We’ve got about 8 people that are across the east coast that do work with our customers in a direct capacity. They will go call on and build relationships, understand what the business strategy is for like a Coca-Cola, Delta, or Verint and then really aligning with them on both their technology strategy but also their business strategies. So we look at them and say what are their KPI’s that they needed to be able to drive their business, their key performance indicators for their board and how technology can help to enable their business as drivers.

BRX: So here’s my question, that all sounds marvelous, I’m just trying to figure out how you get the conversation. How do you get that conversation going with these really large firms? Aren’t they bombarded by consultants?

MS: Yes they are, and really a lot of the groups are. A CIO or a CMO won’t take cold calls. So a lot of it is network. We’ve got guys that really aren’t off the bus… Accenture and Anderson consulting [they have] a lot of guys just out of school but our average tenures about 18 years and so it’s folks that really understand the community and that have been in the marketplace and well connected. It’s very service-centric and very value-centric and we’ve got a good reputation here in the southeast and east coast towards delivery and we’ve been blessed to be able to continue that reputation going.

BRX: Now when you started were you always Microsoft-Centric?

MS: Yes, we started really purely as a technology play. It was really the idea of taking this unified inbox with email and voicemail and faxing to large corporations. I think Bellsouth, Delta, and Coca-Cola were big early customers of ours and then obviously as IT continued to get more and more complex, we had that broader spectrum. Our customers are the ones that really encouraged us to get into the business strategy and consulting side [they] saw the excellence of what we were doing on the technology side and said, you would be a lot more valuable to us as the marketplace evolves to be integrated with our business strategy and our IT strategy and digital marketing strategy by tying business and technology together. That’s worked out well and the nice thing too, tying all of this together, we’ve worked with a lot of groups like The Weather Channel and Coca-Cola have venture arms. They have time, money, people set aside for strategy around innovation, both internal as well as for the venture community. It’s awesome to be able to work with them and one of the offerings we have is around innovation management framework that really helps to captivate or collect and farm and then prioritize the ideas from some of these strategy houses within a Coca-Cola or Elavon or whatever.

BRX: So you’re enabling, facilitating what these two guys were talking about in the first segment about large enterprise really getting in and supporting that. Everyone assumes that it’s the startup that needs coaching going into that meeting, and that’s not true. The large companies need help knowing how to engage with those small companies, picking an appropriate starting point, an appropriate engagement in a way to get started with working with those startups. So absolutely, both groups need help pulling that off.

MS: I’d say even for some of the startups that we work with…in this strategy consulting, we will do anything from a pitch sheet to how to go [after] venture capital. [We help them define] what are they trying to ask for, defining what their market is… some of them directly know we’re going to get bought, [they] want to get bought by Verint or by Coca-Cola or AT&T.

BRX: Now twenty years ago when you were starting with Microsoft-Centric stuff, that seemed like probably a great idea but now a days is it still a great idea?

MS: It is, actually Microsoft, especially with their new CEO that [was announced earlier this year], Satya Nadella, he came up from the R&D ranks and obviously has a tech perspective... One of [my] favorite quotes over the past week or two [from] when he got announced was “The marketplace doesn’t value our past. Everything is about innovation.” So he was in the whole cloud strategy perspective, you see all the big companies like Oracle and IBM and any large company is really focusing on how the cloud can revolutionize both a cost structure, their ability to go attract customers and really cut costs at the same time and so he’s all about the cloud. It’s sort of a huge transformation in large corporations. The cool thing for startups is they can start this idea generation, sort of coding if you will, within days because they can go to an Azure or Amazon web services and all the infrastructure services are already there. Their renting it, their leasing it. They’re not having to get the high end venture money that they would have to do in the past. They’re already on business value strategy and prototypes and so it’s just a hot space. IT is great in Atlanta and Microsoft’s one of the leaders across that industry.

Listen to the full broadcast here or the Intellinet segment here.

Integrated Solutions in Action: Have You Met David?

Strategy in Action: Have You Met John?